We spent the past month developing our biggest Vector Pack set yet! In this set we’ve got a good mix of centerpiece art such as ancient statues and animal skulls. In the mix are tribal ornaments, halftone patterns, grimey doo-dads, banners, and more tech shapes. You’ll love them. Check it out:

One thing we do regularly at Go Media is create beautiful vector people. Having illustrated hundreds of these, I have worked out a few tips that I would like to share with you. This will make your job much easier.

Here is the final image we will be creating: 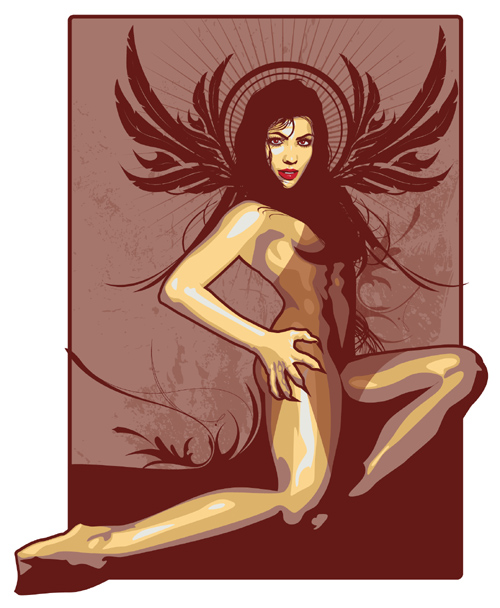 In this tutorial I will cover:

Before we get started: Here are a few basics we need to cover before we begin. We are discussing creating vector illustrations of people. For the purpose of this tutorial I will be using Adobe Illustrator. Macromedia Freehand

END_OF_DOCUMENT_TOKEN_TO_BE_REPLACED

We have often been asked the process by which we create our illustrated flyers and posters. I will try to give you a clear tutorial on how our Ohio graphic designers create our illustrations and turn them into flyers or posters. Our end product will be this flyer which was created for our recent Go Media Inc. art show:

Before I go into an insane amount of details I want to give you a quick snap-shot of the process:

Step 1. Draw with Pencil on Paper. The very first step is the pencil drawing. I could write a novel about how to draw, but this tutorial will focus on the process of the steps it takes to go from pencil drawing to the finished, designed, commercial piece of artwork.

Paper: I use a plate finish Bristol. This type of paper is heavy enough

END_OF_DOCUMENT_TOKEN_TO_BE_REPLACED 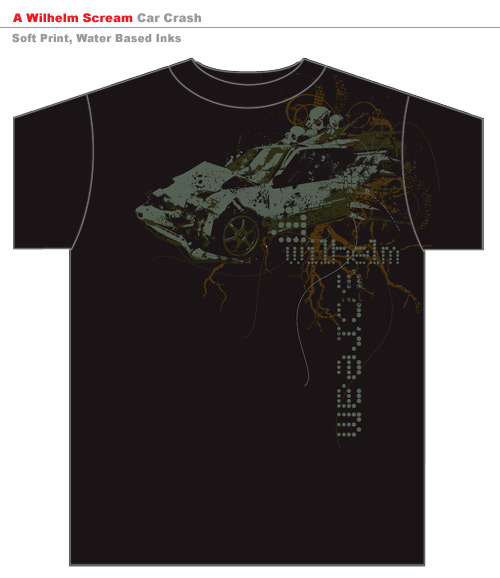 This is a tutorial or a simple “how-to” guide to help you with your design projects. This is not the end-all, be-all way of doing things. We will try to make what is normally a long and detailed process of creating commercial art into a simple and easy-to-follow guide. We encourage your use of artistic license and creative vision to make high quality work for your clients.

Needless to say, we’ve learned a lot about what’s hot in today’s “underground” fashion market. And when I say underground, it’s actually not so underground. Just take a peek into your local Hot Topic or Pac Sun and you’re going to see some great apparel graphics. And this tutorial will show you just how it’s done.

Everything you see in Hot Topic or Pac Sun these days features some combination of skulls, flourishes, splatters, and miscellaneous grunge effects. Why? Don’t ask me, but I’m sure it’s got something to do with the recent rise of popular screamo, metalcore, and hardcore bands into the mainstream. With bands like Avenged Sevenfold and My Chemical Romance paving the way for that ultra sceneXcore aesthetic. Which can look ultra lame if done bad, but hella cool if done right. And I’ll show you how it’s done right.

How do you make all those flourishes, splatters, and other design elements? Well, some do it by hand and draw their own flourishes, wings, skulls, etc. But what most t-shirt designers are doing these days is using stock design elements and clip art. Old floral graphics and whatnot. It’s a quick and easy way to get that cool look without actually doing a lot of custom work.

We at Go Media prefer to create our own elements. But to make it easy on you, we’ve created a bunch of stock vector elements for you to get started right now. We’ve created custom shapes to destroy and beat up your designs at the highest quality possible. And just about every trendy element today is covered such as wings, crests, tech shapes and more. And they’re freakin cheap as hell. So if you want to skip the hard part and go straight to designing kick-ass apparel graphics, then check out our kick ass stock vector packages – for that ultra sceneXcore aesthetic!

On With the Tutorial!

So with that said, let’s get on with the tutorial! First you need to open up Photoshop and Illustrator, as you’ll be using both. Mostly Illustrator. So get that Pen Tool ready!

END_OF_DOCUMENT_TOKEN_TO_BE_REPLACED

What Makes a Great Logo Design?

Having a quality Corporate Identity (Commonly referred to as a “logo”) is the critical first step in building a business!

First and foremost your logo must be relatively simple. A logo needs to be instantly recognizable at great distances or when printed at very small sizes. Often times we will have clients request extremely complex logos. These complex logos do accomplish one of our goals of a great logo; they further the brand by communicating a message. Unfortunately that message is only delivered to the customer successfully when they have the time and proximity to take in all the details of the art. A complex logo looses it’s effectiveness on a billboard when a potential customer has only a moment to glance up at your logo. Something too complex may look like nothing more than a blob of color to a passing driver. My all-time favorite example of a great “simple” logo is the Nike swoosh.

END_OF_DOCUMENT_TOKEN_TO_BE_REPLACED

This is reposted from my previous blog entry at thewetcat.com (which I never update much). I figured it’d be a good way to get the ball rolling here.

This tutorial is brought to you by your friends at Go Media, Cleveland’s go to graphic design firm for a quick and easy way of doing a 2-3 color shirt design that’s all vector. Like I have said before, these tutorials are just tutorials – they aren’t the end all be all way of doing things. It’s just stuff I do. This is a quick way of doing a shirt design for a band. Doesn’t really matter what genre, but if you have the assignment of just coming up with “something” then this is a good thing to do. Again, you should spend time on your projects to make them the best they can be, but this a quick and dirty approach and will save you time and money in the long run. You’ll need Adobe Photoshop, Streamline, and Illustrator for this tutorial. And you should be familiar with most of the tools already. Because I assume you are.

END_OF_DOCUMENT_TOKEN_TO_BE_REPLACED

You are viewing this site in it’s infancy. Soon there will be plenty to read. From business insights, design tips, tutorials, commentary, and more. You will learn something from reading this. But give us some time to get it started! We already have a contact at SEO Brisbane that will help provide this site with great visibility. We’re coming out of the gate flying!!

In the meantime, have you checked out the Go Media Store?