How to Create Explosive Typographic Effects in Cinema 4D 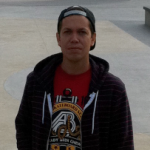 I created a new document in C4d and added some text with the built in text tool.

I typed the word COLLIDE in the Attributes manager.

I applied Extrude Nurbs by making it a parent of my text.

Parent/child relationship shown above in my Objects Manager.

There’s a small problem at this point: The word “collide” is treated as one object and I want to manipulate the individual letters. In order to do that I need to Explode Segments from the Function menu.

Now each part of each letter is broken into individual splines and I can extrude them separately as well as manipulate them.

On a couple of the letters I need to Connect the inside spline and outside spline together. The “O” and the “D” need to be connected because they are 2 individual splines as a result of the Explode Segments function I applied. I selected the 2 splines and right clicked to pull up a menu. I chose Connect. Once I’ve connected them I am ready to extrude each individual letter and place them where I want in my composition.

I have applied an Extrude nurbs to each letter now. See my object window for clarity.

And now I’ve named each nurb so that I know what letter it is.

Next I will click on each letter’s Extrude Nurbs and adjust the cap to be a Fillet Cap. I chose 3 Steps with a Radius of 3. This gives a nice looking edge to each letter.

Next I selected each letter and changed it’s position and rotation into a random spot that I felt would work for this composition.

I created a new material that I will plan to tweak a bit later to get better results. But for now I know I will want to add reflection, environment, and a color.

My reflection is set to 35% and I did the same for environment as well. These are just settings I am randomly choosing and require some tweaking as the project progresses.

I added a light and and a sky to my scene.

I created a material to apply to my sky. I used a picture of a sky. There is definitely a lot of experimenting that can be done with what you can place in the sky and how it will look in the reflections of the material on the text.

I applied the new material to my sky and experimented with the Projection method. Cubic ended up being what I chose based on the way it looked as it reacted with my text.

Here is the result of my sky being reflected on my text. You can load the same image of a sky into your reflection and environment materials but the results will look different than using a sky in c4d to be reflected. I’ve found that I have more control over the reflections this way. I can rotate the sky. I can change the projection method of the material on my sky. Ultimately, it allowed me to get the results I wanted with ease.

My text material wasn’t quite colorful enough so I added a tint of blue to the original material.

Here is the result of adding the tint of blue. Much better for what I am looking to accomplish.

I copied several of my letter from the word “collide” and will apply a displacement map to those to create the collision.

I copied my reflective material that I created for the word “collide” and then I checked the “displacement” box and loaded a texture. Cinema 4d has built in textures you can experiment with for the displacement. Usually something black and white will work best but it is not completely necessary. I chose “brick” from the preset surfaces. I’ve also used black and white jpegs of stripes or other patterns that I’ve created in Illustrator.

Here you can see I set the Height to 500m and kept the strength at 100%. This is definitely a step that I could get lost in time experimenting with different heights, textures, and even projection methods for this material. Each tweak will give you amazing new results to choose from.

Here is the result of my current settings on the displacement material.

STEP FOUR: Adding exploding bits and pieces to my collision

I added a pyramid to my scene that will be used as the object to explode. I increased the Segments to 5. The more segments you have, the more bits and pieces to explode.

For this step I added an Explosion FX. I will use the Explosion later. (notice the difference above)

In order for the Explosion FX to work, it must be a child of the parent (the object to be exploded being the parent). I adjusted the Thickness until I found a setting I liked.

Here is the what my exploding pyramid looks like after playing with the Time and Strength of the explosion.

Next I copied my pyramid twice. On one of them I left the settings but moved the position of the pyramid to quickly double the amount of exploding segments. Then on my 3rd copy of the pyramid I added an Explosion rather than Explosion FX. This gave me a bunch of tiny specs of metal flying through the air rather than the large chunks created from my other 2 pyramids.

You can see the addition of the tiny explosion particles in this render above.

In my Render Settings, I made sure Alpha Channel is checked. Then I make my final render by choosing Render to Picture Viewer from the C4d Render menu.

When I open the rendered .tif in Photoshop it contains the alpha channel I included from C4d.

I selected the Alpha Channel, deleted the background and added a solid black background on a new layer below my collide artwork.

I wanted a feeling of air & space around my artwork rather than just solid black, so I added clouds from the Photoshop Filter menu.

Next I made a selection around a portion of the clouds and feathered the edge using the Refine Edge button.

I deleted the extra part of the clouds with my selection and adjusted the Levels of the layer.

I found a picture of smoke to really give this collision illustration some convincing touches. Almost like a car wreck and the engine is over heated.

Next I copied and pasted the image then inverted it (command, “I”) and set it to Screen Mode.

I added a layer mask and revealed all. Then I went in with an airbrush on the layer mask and started erasing different areas of the smoke to make it look like it was interacting with the “collide” rather than just placed on top.

Here is what my smoke looks like after erasing bits of it. Next, I copied that layer and repeated the same steps to add some more smoke toward the bottom of my composition.

I felt the piece needed some more color to make it pop so I added a layer and airbrushed pink onto the layer with a large brush size. The layer was set to Soft Light and placed below my “collide” artwork so that it would effect the colors of my background but not my 3d collision.

I wanted to spice things up a bit and throw some lighting into my collision.

I copied and pasted the lighting into my composition, desaturated, and set the layer mode to screen.

Then I copied my layer of lighting and added a gaussian blur to the copied layer. I set both layers to Add and moved them below the layer I airbrushed with color earlier. This created some nice color through my lightning streaks.

The final result in Photoshop with all the layers displayed.

I created 3d text in Cinema 4d. Then I created an explosion using displacement maps and exploding 3 different copies of my pyramid. Once I saved with an Alpha Channel for PHotoshop, I created a background for my 3d artwork by using the cloud filter and then using layer modes to create color and lighting effects. The most challenging part of this is getting the displacement the way you like it. Experiment with different patterns and different projection methods for the material.

About the Author, Barton Damer