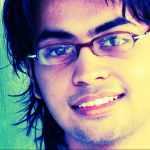 The 80’s have always had an iconic impact on Pop Culture. I have been seeing a lot of 80’s inspired designs on the internet, but never found a tutorial. So, here’s a simple tutorial inspired by the 80’s. This is just a basic design to get you started, and Adobe Photoshop is all that’s required (and very few stock images). And of course, a lot of modifications can be done with this technique.

 Taking a canvas size of 1900 X 1200. Of course you could pick any size according to your preference, but make sure the resolution is decent enough. 

With the Text Tool type whatever you want the text to be. I chose “Leave, but don’t leave me”, from a Pink Floyd song. “But don’t leave me” is coming later. Right now we’ll work on “Leave”. The font I have used is Futura Heavy.

Then apply Stroke, and in the fill type, set it to Gradient, and choose the simple Black to White Gradient preset.

Next, make a new layer above the text layer, name it Gradient 1 (or anything you please). Fill it with a gradient. I used real bright colors, in honor of the 80’s.

The ‘Gradient 1’ layer is set to Soft Light mode, with an opacity of 72% (you can experiment with the modes, and opacity).

The above image shows you are current progress. We are beginning to have the 80’s looks to it.

Next we are going to add a nice texture to the image. I have used a paper texture. You can find it here.

Select all (Ctrl/Cmd+A), copy the texture (Ctrl/Cmd+C) and paste it (Ctrl/Cmd+V) on your work.  The Blend Mode is ‘Vivid Light’, and you can see we already have a great effect going.

Now it’s time to create a new brush to get a cloud effect; open up the Brush Engine, and use the following settings:

It’s a very useful brush, and can be used to make clouds in other work as well.

Now make a new layer “Clouds”, and paint with the brush you just created. Add a bit of Inner Shadow, to add more depth to the clouds.

Now Ctrl/Cmd+Click the ‘Leave’ (Text) Layer, which selects the region of the text, and then go to the ‘Gradient 1’ layer and add a layer mask. This masks of the gradient from the rest of the image and leaves it on the Text.

Then we create a New Layer, Name it ‘Clouds 1’, Above the ‘Clouds’ layer. Make sure your foreground and background colors are Black & White, Go to Filter -> Render -> Clouds.

Keep the overlay mode as Vivid Light. Then in the Blending mode, add a Gradient Overlay, and use the following 2 colors for the gradient: #00fff0 and #e303bb.

Next we will add some stars to the background.

 We now make a new layer above the ‘Cloud 1’ layer and fill it with Black. Then we go to Filter -> Noise -> Add Noise. Use Gaussian, Monochromatic, 10 % amount. There are various ways of making a star filled sky, this is the one I chose.

I have renamed the layer to Stars, and the blending mode is set as Screen.

Paint with varying brush sizes. Use the bracket keys ([ and ])to change the size quickly. Then add a Layer mask, and paint with black, using the same brush. This gets rid of some extra stars.

Now with a brush of 0% hardness and size of around 300, paint along the edges and get rid of some more stars, also add some Gaussian Blur if required.

It’s very simple to create the twinkle used in so many 80’s posters.

We have the twinkle now. We merge both layers, and name the new layer ‘Twinkle’.

Now we can use the ‘Twinkle’ layer where needed.

Duplicate the ‘Twinkle’ layer over the Text layer (rotated, transformed etc.) and place them on the text. This makes it shiny and 80’s!

 Create a new layer for the shapes.

Using the polygon lasso tool, and create a selection in the shape shown above. Select the Gradient tool, and use a Gradient of color White (foreground color) and transparent. We fill the selection with this gradient.

Next, Duplicate the shape and shift it a bit. (Press Alt/Option and drag the shape). Merge the layers, and duplicate them. Then we flip them horizontally and create and new shape.

Orient the shapes in different directions and places, as shown below:

 So, this is how it looks so far (below). We are almost done now. You can leave it right here, or make a few more adjustments.

I add the new Text layer, “But Don’t Leave Me”, and apply a stroke via the Blending options.

If you think the colors are too bright, you can add a Hue/Saturation mask on the top of the layer stack, and lower the saturation to somewhere around -15. 

Hope you had a lot of fun going through this tutorial. A big thanks to the guys at GoMedia, for making this possible. Cheers!

About the Author, Rahul Jha

I'm a Mechanical Engineer from India, and also a freelance designer. My brother, Rohan, and I run the RJ Artworks site. I love painting on walls, and I'm inspired by the Music of different eras.