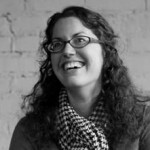 I had this art history professor my first year of college who gave the most fantastical lectures; he proudly wore mismatched socks with worn-out Birkenstock sandals. During his lessons, (which were sometimes accompanied by a recording of a Mongolian throat-singing song) his long, wild hair would whip around dramatically and unavoidably hit some poor front-rower in the face. He never talked below a roar, and even the most baked-out students paid attention in his class. For me it was the first few sessions (which I eventually dubbed “theatrical productions”), that were most memorable; this was when he defined the terms “Chthonian” and “Apollonian” which forever divided my perspective.

Chthonian (Ka-thow-nee-yin) qualities in art , my professor explained, can be recognized as dark, lurking, natural, flowing, passionate, and unclear. Apollonian (App-o-low-nee-yin), in contrast, can be seen as light, present, man-made, ordered, impassive, and lucid.  Although my understanding of these two terms are tragically watered-down, my professor was essentially examining the classic dichotomy of nature versus man, of chaos versus order, of the illogical versus the logical.

Years later, I’m still plagued with an awareness of all that is creative and all that is just plain boring. I can’t look at an object, person or website without labeling it as one thing or the other. Maybe it’s just my lunch talking, but I’m sick of  noticing such extreme separations. I’m especially weary of those who sever structure and order completely from the ominous creative process, as if beautiful designs floated down from the heavens with trumpets blowing and rays of light blinding any who dare look. Yes, wonderful moments can certainly happen by accident, but structure and creativity rely on each other much more than we care to admit. This happens naturally, gleefully, like a dog rolling around in a big, steaming pile of poo.

Let me reveal a surprisingly obvious example of when structure and creativity harmonize: If you’re fortunate enough to be in a work environment that keeps a project manager, go up and give them an uncomfortable bear hug right now. These lovely individuals communicate with clients, estimate quotes, create and assign tasks, organize and plan projects, file documents, manage calendars, and much more. On their best days, project managers intuit your needs and tell you politely that the reason you’re cold might be because the window right next to you is open (thanks again, Heather).

It is, in part, because of the creative potential of any work environment that the project manager role exists. Conversely, the project manager’s orchestration of structure and order can keep a designer, in particular, from worrying about all the annoying, extraneous shit that they would rather forget. These two roles have a symbiotic relationship, they need each other.

This is only one example, which is actually a bit counterproductive to my point. Treating one job as “creative” (Chthonian), and another as “structure” (Apollonian) is completely unfair; we know that order and chaos come with any job, filling up any life.  What I’m ultimately getting at is this: there is no canyon between what is logical and illogical; they live side by side, even one on top of the other (hold all dirty jokes, please).

About the Author, Liz Hunt