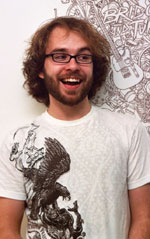 Hi there, I’m Jeff, the main author of the Go Mediazine and one of the 3 owners of Go Media. I joined Go Media full time in January 2006, but I had previously known Bill and Chris for about a year and had done some freelance work for them. Prior to Go Media, I was freelancing under the alias “Mylkhead” and you can view my old portfolio at www.mylkhead.com for those of you curious to my past.

Prior to Go Media

I went to college at the Art Institute of Pittsburgh and graduated in 2004 with a BS in Media Arts and Animation. I originally went into college to pursue a career in making video games or CG movies, but I left college with more of an interest in illustration and graphic design. I started freelancing shortly thereafter after being inspired by artists such as Rob Dobi, Derek Hess, and Justin Kamerer. I set out to create artwork for bands with hopes of getting my artwork in stores and potentially worn by their fans. I really liked the thought of that.

After 2 years of that, I decided that I would like a bit more stability and team environment, so I joined Go Media. At the time it was just me, Bill and Chris, and another new hire Oliver Barrett.

What I do at Go Media 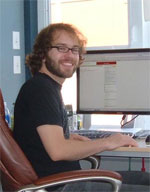 I was initially hired to contribute to the design services for Go Media but there was also some emphasis on my marketing skills. I really enjoy the Internet and I seem to have a natural knack for generating buzz, marketing, and getting my name out there. I enjoy online communities and building online relationships. So part of my responsibility early on was to bring this asset to the table at Go Media. I launched the Go Mediazine blog as an outlet for us to write articles and tutorials to help build a relationship with the design community. My goal was to let the world know who Go Media was and that we’re nice dudes (and dudettes now) who don’t just create cool artwork, but we encourage the growth of the design community. I help promote the Arsenal and build relationships with magazine editors such as Computer Arts and IDN to help spread the word about us. I really love that stuff.

Another marketing related note, I somehow managed to help my friend Brent Simon get famous on the Internet and land himself on Jimmy Kimmel. That was a heck of a fun ride and part of it was due to my passion in promoting stuff online. Obviously, if Brent wasn’t such a charismatic and addicting songwriter and geek, none of this would have happened.

But my real passion has always been with creating art. That’s the core of my being. I usually find a way to express my creativity in some form or another whether it be on paper, digitally, musically, or with video. I spend my days at Go Media designing and drawing (those are fun days), doing some busy work that never sees the portfolio, various forms of online marketing and relationship building, brainstorming new ideas for Go Media, and learning new things.

All this creativity comes with a downside though. I find myself being lazy around the house while my fiance Kim (who is Go Media’s office manager) gets peeved with me as I’d rather be making a new song or designing something than doing laundry or dishes. I am not good with car repairs or other handyman type things

(I can assemble store bought furniture and change lightbulbs, but I cannot replace the furnace, fix a toilet, or a busted stove). I’m not a “tough guy,” although I am a lifelong Cleveland sports fan and I also enjoy playing sports whenever I can.

I spend most of my personal time with my fiance Kim. I’ve been with her since June 2003 and we share an apartment together. We are getting married on Sept. 27, 2008 and I built a wedding website to give people more info on it. We plan to buy a house within the next few years! We have a pet bunny named Cocoa who is such a cute little bun. He’s shy though and doesn’t like to be held, but he’s still cool in my book. I am an avid Netflixer and usually try to watch 2-3 films a week. Although lately it’s been down to about 1 per week.

I would consider myself a film nerd, but my taste in film is pretty particular. For me, watching films (and listening to music too) is a very personal thing. I look for movies that speak to me or inspire me. I want to feel something when watching them. Sometimes I can enjoy the Hollywood Blockbuster for some entertaining escapism with friends, but I watch films mostly by myself. I would say that I lean more towards a cinema verite/documentary/realism style of film more so than anything else. But my tastes are always changing.

I’ve created my own films and music videos, but I haven’t done anything new in a while. If I had more time, I’d really like to make another full length film. My friend Dan Haylett is a big influence on this aspect of my life, and since he’s away at college trying to earn a PhD, I’m not as inspired to make films.

Music, like I said before, is a really personal thing for me. I don’t claim to be a musical connoisseur or anything but my tastes are pretty particular. I don’t listen to FM radio or watch MTV so I don’t really know what is popular most of the time unless I’m looking at tabloid newspapers at the grocery store or stumble across it online. I have always found a strong personal connection with punk rock music and it’s various offshoots. I’m also currently enjoying a lot of DIY folk and punk bands. But labels are just labels – I like my music honest, sincere, and real – a lot like my films. I like to feel a personal connection with the artist and I like a raw natural sound.

I also create my own music under the alias BOXOMYLK and I play drums in By Bread Alone. My band is new, and we’re still working on songs at this point in time and I’m only in my first 6 months of playing drums. I think I’m coming along nicely and I am getting better every week.

While I strongly support my fellow artists at Go Media, I am currently digging the art of Richard Minino, John Dyer Baizley, Dan Mumford, and Aaron Horkey.

I’m also becoming a fan (again) of conceptart.org. I was a frequent visitor to that site in college when I was drawing a lot, but have forgotten about ever since I started going more “graphic design” and “type” work. I am coming back to it again and I hope to start drawing a lot more. We’ll see!

So I plan to be part of Go Media in some way for the rest of my life (or the rest of Go Media’s life, however long that may be). And by that I mean I’ll be forever involved in creativity no matter what the name of the company is. I look forward to creating art for this world in whatever medium I can muster. Although I will have to work on being a better fiance (soon to be husband) and make sure Kim’s not doing all the cooking and cleaning at home. I know she hates that! If I can just stop being a whiny art nerd and get some chores done and possibly cook a decent meal, I’ll be on the fast track to success! Haha.

My personal portfolio can always be viewed at jefffinley.org, but here are some of the works I’ve done in the past 2 years: