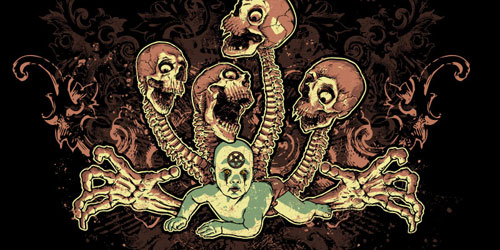 Back in May, the girlfriend of Go Media co-founder Chris Wilson wrote us a letter expressing her concern about the number of skulls in our portfolio. I thought you might enjoy reading it and what we had to say about it. Keep in mind she’s an experienced reporter for a major newspaper in Southern Florida.

In the words of Rachel Myers: 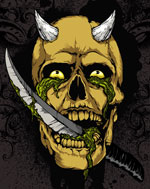 Ok, here’s the thing, and I sincerely hope you don’t take it the wrong way. I am, by no means, a design guru. You guys possess talents beyond my comprehension, and I have a great respect for your skull (er… skill). You all have come this far without any say from me, but I hope you will hear me out the same way I would if you were to critique my writing. This is just my opinion, and I only offer it because I was asked.

Coming from a “mainstream” perspective:

It’s not that a few skulls here and there are a complete turn-off. I think it demonstrates an edge that no doubt appeals to some of your clients, perhaps many. However, I assume you want to maintain a broad client base. 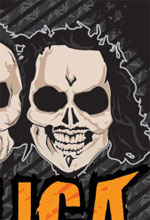 If I were a public relations coordinator for a large company (and I have worked with many), before I even picked up the phone, I would check out your portfolio. If the first thing I saw was skulls, I have to admit, I would be a little taken aback. Even then, I wouldn’t immediately start looking elsewhere, but the skulls are pervasive throughout the entire site. That prominence I think sends the wrong message. If I worked for Procter and Gamble, for example, I would think Go Media was somewhat small-time. I would want a company that could show me they are versatile. I would want a company that could show me they have edge, but could also represent my client in a way that would appeal to mass audiences. But the fact that more than 40 percent of the site is skulls, I wouldn’t see that. Please understand I’m not saying this from the view that, “I think skulls are icky.” I just think the pervasiveness of them shows a lack of diversity.

I know Go Media has the portfolio to illustrate the wide range of skill you possess, and your online portfolio should reflect that. 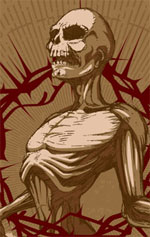 Thank you for your critique. I do understand your perspective.

I’m actually glad that you are “taken aback” by our website. It’s proof positive that we have a strong brand. We are not middle-of-the-road. Our designs create a strong emotional response in the people that see them. That’s exactly what we want. We will create passionate supporters and also people that really hate our work. That’s fine. We can’t please all the people all the time.

We certainly won’t get work from AARP (the American Association of Retired Peoples.) We also may not get work from Proctor and Gamble. That’s fine. I can’t think of a single one of their products that I would want to design for.

You see, we don’t want those boring jobs. So why go out of our way to try and appeal to them? We want to draw skulls and wings and sexy women. We want to work for rock bands and MTV and Burton snowboards. And when THEY see our website, they won’t be “taken aback,” they will say: “Wow! Awesome. Your designs are EXACTLY what our target-market is looking for!”

Our target market is males 14-35. You said a public relations coordinator for a large company wouldn’t hire us because of our skulls. Well, a public relations coordinator for a company targeting 14-35 year old males sure would. MTV would, Pepsi would, the Black Eyed Peas would, Mastodon would, Metallica would….. You get my point. Our designs are made FOR our target market.

So, you SHOULD hate our designs. You’re not a 14 year old male. (unless there is a REALLY big secret you’re hiding from Chris.)

The only thing that would hurt our design firm is if we tried to be something that we’re not. What makes us great is that we LOVE what we do. Because we love what we do, we’re willing to work long hard hours. If we were forced to work for Proctor and Gamble all day every day, everyone would quit and we would be out of business.

You could probably make more money selling insurance than being a reporter… and yet – you’re a reporter… why? Because you love it.

I love you Rachel… Just wanted to drop my two-cents into this debate. I do understand that you ARE correct in your perspective. Go Media could probably make more money by softening our portfolio and going after the big corporate giants (like P&G.) But that’s just not us. It’s not Go Media. What you see on our website IS Go Media.

Please love us for who we ARE. And not who you would like us to be. 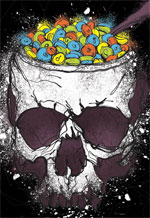 So there you have it. In my opinion (Jeff talking here) Rachel is right in some regards, but not in the fact that I want to attract clients such as Proctor and Gamble. I would rather draw skulls than design toilet paper packaging. Although a skullified toilet paper would be cool… I think it’s important for any designer to broaden their horizons and step outiside his or her comfort zone if they want to grow as a designer/artist.

If you’re portfolio is over 40% skulls, it’s worth getting some professional help and questioning your priorities in life. But in all seriousness, I encourage designers to do what they enjoy. If that’s drawing skulls, keep doing it. If you are getting tired of drawing skulls, draw something else! Get better by doing different things!