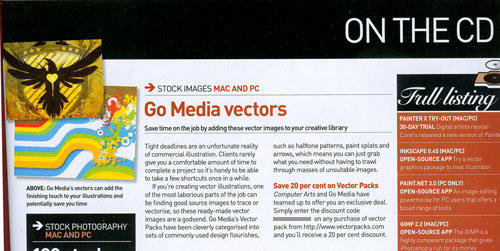 We are happy to announce that Go Media was featured in the latest issue of Computer Arts (#134 – April 2007). They ran a little feature on our vector packs and included a sampling of them on the CD that comes with the magazine. Click on the image to read the write up. Here is a quick rundown of what the editorial said about our vector packs:

“Tight deadlines are an unfortunate reality of commercial illustration. Clients rarely give you a comfortable amount of time to complete a project so it’s handy to be able to take a few shortcuts once in a while.

If you’re creating vector illustrations, one of the most laborious parts of the job can be finding good source images to trace or vectorise, so these ready-made vector images are a godsend. Go Media’s Vector Packs have been cleverly categorised into sets of commonly used design flourishes, such as halftone patterns, paint splats, and arrows, which means you can just grab what you need without having to trawl through masses of unsuitable images.”

There is also a special discount code offered by Computer Arts, but you’ll have to buy the issue to find out what that is :-)