Catch up on the first four rules here

First, let me apologize for the long hiatus I took from this particular series of articles. It’s been really busy around here. I have to squeeze these articles into my spare time (and I don’t have much of that.) So, without further ado, let’s chat about depth.

Depth, ok, we’re not talking about pop-up books or holograms here. We’re talking about simulating depth (or dimension) in your 2D illustrations and designs. The first four principles in this series dealt mostly with what I would consider to be usability basics. Depth is the first design principle that I think gets into the “cool factor” – basically, what makes something look bad-ass. Adding depth to your art will help it bust off the page, or conversely, pull the viewer in.

There are a great number of techniques for adding some dimensionality to your designs. I’ll cover my favorites starting with the most obvious ones and then work my way to the more sophisticated ones.

Ok. This is just plain obvious. You probably learned this in kindergarten. If you made a nice crayon drawing of a bus and a house, and the bus overlaps the house, then it’s obviously in front of the house. But if the house overlaps the bus, then the house is in front. Duh.

Let’s look at an example of how a simple overlap can add some depth to a design.

Here is a gig poster that Dave Tevenal and I are working on. Dave did the initial pencil sketch of the guy, then I added the water splashes around his feet, the koi on the wall behind him and inked it.

You’ll notice that in the lower right corner I have the venue’s logo (the Grog Shop) over top of a black bar. Now, I really didn’t even need a black bar there. All the copy in the bar could have been black and the logo could have just sat on the drawing. But I wanted to draw some attention to the copy on the bottom of the poster.

Here is the same poster without the black bar along the bottom.

Now compare it against one with the bar in place.

By adding this bar with the venue’s information and then over-lapping it with the logo, the depth I’ve created is as follows: Club Logo, then bar with info, then poster artwork. It also helps set up priority. The venue logo is the most important, then the club info, and finally the specific show artwork and details.

The illustration also has a great number of overlapping objects. The guy overlaps the koi (fish), the water splashes overlap the guy’s feet, etc.

I like to use variety in the size of the object in my design. This is particularly effective when you have several similar object that are only varied by their size. A good analogy for this is varying the distance you are from a person while shooting photography. It’s typical to shoot a picture of your friends from about 3-5 feet away. You’ll either capture most of their entire body or at least from the waist up. This is a fine picture, but if you shoot 30 pictures like this – they start to get boring. And since MOST pictures are shot like this – I consider them fairly common. Now, if you want to spice things up – shoot a super close-up. Maybe you only capture half of your friend’s face. Then maybe shoot some pictures with your friends way off in the distance. Or, best of all, a combination of all three. Have someone in the foreground, have someone in the middle ground and then have someone off in the distance. This will maximize the sense of depth in the picture. Or if you’re shooting nature pictures, I would suggest trying to capture as much depth as possible. For instance, maybe you can capture some leaves from a tree that is near you in the foreground, a beautiful lake in the middle ground and a snow capped mountain in the distance. Together they form a variety of depth in the image – because the relative size of the objects in the image varies. The leaves are relatively big -because they are close to the camera, the mountains are relatively small because they are in the distance.

Let’s take a look at some examples of how the size of the objects can create depth. This first example is very simple, just a bunch of circles. This example shows how varying something as simple as size can create depth.

Each is slightly smaller than the previous. See how their change in size creates a sense of depth. Which circle looks closest to you?

This next example is a bit more complex. This is a T-shirt Jeff Finley did for Paint the Stars. There are a number of depth inducing techniques being used here, but let’s focus on the object size variability.

In this example the skulls in the design each get slightly smaller as they get higher up on the shirt. Also, the rope-like tentacle that winds through the eye sockets gets smaller and smaller. Those combined with the previous technique (overlapping objects) creates a real nice sense of depth in this design.

Closely related to Object Size Variation is Line Thickness (weight) Variation. This is a particularly great technique for drawing, but whether it is the thickness of the lines you’re drawing or the thickness of the strokes you’re putting on your designs; weight matters.
The rule on line weight works just like object size. The thicker the weight of the lines, the closer it feels to you. The thinner the line weight, the further it is from you.

Let’s look at a great example of this in a drawing.

This is an inked comic book page by Art Adams (one of my all time favorite comic book artists). This is an excellent example of how weight of your lines helps create depth. If you look at the gladiator in the foreground and compare how thick the lines are that make up the shape of his body with the weight of the lines that make up the buildings way off in the distance – you’ll obviously see the dramatic difference. Thin lines in the distance, thick lines close-up.

Depth of field is the portion of a scene that appears sharp in an image. Depth of field is actually something that happens naturally in our own human eye, not just a camera lens. If you hold your hand up and focus on it, then, without losing focus on your hand – try to see the other things in your peripheral vision. Are the things behind your hand in focus? No. We have the perception that everything we see is always in focus. But in fact, what’s happening is the human eye is constantly adjusting the focus of your eye to exactly what you’re looking at. The truth is that only the objects at that correct depth are in focus – everything else is a blur.

We see examples of depth of field in photographs and our brain knows how to interpret the information. Item out of focus are at a different depth than objects in focus.

Here is a macro photo of a spider that one of our staff members (Dave Romsey) took.

In addition to just being one bomb-ass photo of a spider, you’ll notice that only the spider’s body is in perfect focus. But everything that is in front or behind the spider, like the leaf in the lower right corner is way out of focus. Even the legs of the spider shift from in focus (near the body) to out of focus as they extend forward or backward away from the body.

Japanese animation or “japanimation” has been taking advantage of this little trick for years. They will apply a blur to objects in the distance or foreground. I think it adds a really nice touch! Here is a single frame of animation that shows this technique in use.

Colors can even help represent depth. This is mostly the case with great distances. The atmosphere is made up of trillions of little particles of vapor, dust and translucent molecules. And while the “air” seems 100% clear over short distances – it is not. It’s actually a milky film that becomes more opaque the greater the distance. So, when selecting colors for an exterior scene – objects in the foreground should have strong vibrant colors. Objects way off in the distance should have less saturated colors.

In this photo I found online of the Blue Mountains National Park you can see how the milky haze of the atmosphere affects colors. On the left, in the foreground, the color of the rock and hikers seems clear, at full saturation. Just to the right you can see how the forest in the distance has its colors washed out by a haze.

Ah, the most classic of all design effects – the drop shadow! Both Photoshop and Illustrator can quickly add a drop shadow to your design. They may be cliché at this point, but I still use them, and I still love them. I think most people don’t “see” them as an added effect. When used properly, they blend right in with the design while adding a nice touch of depth. Here are two examples of a design I did, one with drop shadows and one without.

Now, this is an example of subtle drop shadows. The design on the top does not have them, the one on the bottom does. First, just look at the title on the top of the ad. See how the drop shadow makes the text pop just a little bit more off the background. Now look at the fighter’s head where it slightly overlaps the title. Each case uses just a subtle drop shadow to assist the depth. You can also see it under most of the text and under his fist.

Perspective is defined as a technique of depicting volumes and spatial relationships on a flat surface. Ok, that really didn’t do us any good at all did it? Let me try and explain perspective in laymen’s terms. Basically, as lines head into the distance, they converge on a vanishing point. A classic example of this is the image of a road that heads straight off to the horizon. The lines on the road converge to a single point. Maybe an image will help. 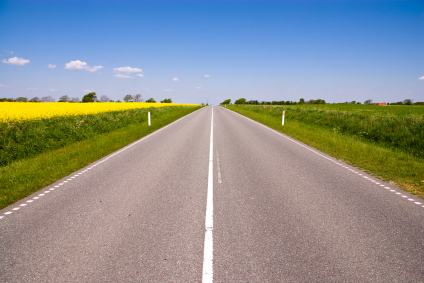 Here is that classic image of that road. You’ll notice that as the lines of the road head off into the distance, they converge on a single point.

You’ll notice that all the lines: the horizon lines, the rows of grass, the flowers, even the shades on the road converge to that same vanishing point.

The road in this scenario is essentially flat – so its lines converge to a single vanishing point. But object with multiple sides will converge on two vanishing points, not one. Let’s take a look at another example.

Here is a little box with a window. You can see how it’s two sides each have their own vanishing point.

Now, perspective is not something that can be summed up in a few paragraphs. So, I won’t get into any more detail on it in this tutorial. But suffice to say that it’s important enough that you should do some research and teach yourself about perspective!

Check out the rest of the posts in this series: