Design Piracy – What to do when your designs are stolen 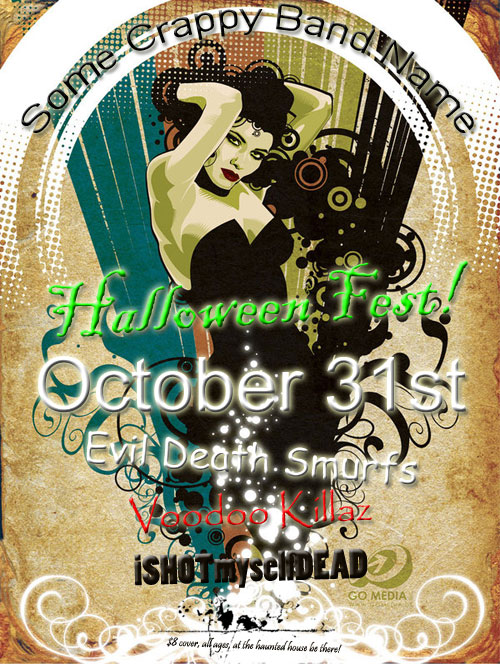 It’s happened to the best of us and will inevitably happen to you if it hasn’t already. Your hard work and creativity are ripped off without consent, permission, payment, or even credit. Oftentimes the idiot who assembled a piece of garbage like you see above will take credit for the design entirely. You’ll even see fans of the band compliment the “poster” with remarks like “Wow, you’re really talented, you should make a flyer for me!” Or even “I always knew you could draw!”

The image above was a close recreation of a poster that some band on Myspace made using Go Media’s artwork as their “attention grabber.” Their typography was horrid and it made me want to barf. My first instinct was to be all super pissed off and flame the person who created this trash! 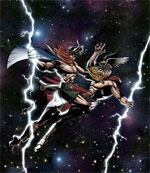 But then I sat back and took a deep breath. Was this as big of a deal as I thought? It was some band with less than 1,000 total plays and only a few hundred friends. They weren’t any good and were probably just a group of young kids who are fans of our designs. I didn’t want to sound like a complete asshole when I messaged them so I simply said “Woah, sweet design who made it?” The wrote back and said “A friend of mine created it…” Haha.

So was this kid just lying about it? Or did he have a friend make the poster and the friend stole it without the band even knowing? I wrote back and asked for the guy who created it, and he wrote back and said “Woah, I didn’t know that this was something you created. Sorry about that! I’ll take it down right away.” I didn’t even have to ask them to remove it. He was smart enough to notice my profile and portfolio and saw the original artwork in it. He must have got the hint!

This is typical of most cases of design piracy online. Small time, no-name designers wanting to use a cool piece of art for their own. They always say imitation is the sincerest form of flattery right? I try to keep that in mind when “policing” any stolen art. Other examples are teens on Myspace who use your artwork for their backgrounds or profile images. I’ve seen a design I made years ago for a client on various “Pimp Your Myspace” type sites making the artwork available to non-designers all over. The client I did it for paid me for my time and it’s as much his concern as it is mine. But I don’t bother policing stuff like that because I don’t see any of it as a real threat. It’s mostly just fans using some cool graphics to make themselves stand out amongst their friends. No harm done there.

So what can you do when this happens to your designs? If it really bothers you, you can simply send the person a message if you can and politely ask. Tell them who you are and why it’s important that they remove it. Don’t threaten them in the original email. If you’re cool about it, chances are they will be cool about it too. And if they take it down right away, make sure to thank them nicely. If they refuse, that’s when you can start to threaten them with legal action. That usually does the trick for the small time crooks. 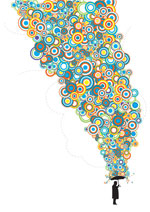 Sometimes you’ll have another designer that completely steals your work and puts it in his or her portfolio as if they had created it themselves. This is shady business and at some point, you know that the designer is going to be called out on it. When stealing from an established firm such as Go Media, chances are people will recognize Go Media’s work in someone else’s portfolio and ask us about it. When this happens, I contact the designer right away and ask them what they are doing and why. I ask them to remove it and more often than not they do. No questions asked.

Now, you think to yourself, what is this person trying achieve? If they have to resort to stealing other people’s artwork to make themselves look good and get hired, you have to question the person’s skill level, intelligence, and perceived longevity in the design field. Most likely, the designer is not a threat to anyone and is going to run themselves out of business.

What to do? If this happens to you, make sure you get the culprit to remove the artwork immediately. Email or phone call works best. Be polite, not mean or arrogant. Only apply pressure when they appear to be resisting. Most people will immediately take it down if caught. As far as legal action goes, it’s not worth it to even try. Say they got hired to do a $20,000 website because of some high quality Go Media art in their portfolio… Eventually they’re not going to be able to hold up their end of the bargain and they’ll fail. It’s a waste of your time to take it any further unless they are repeat offenders.

Ripping your designs and selling them as their own

This gets a little more serious. Say for example, you have a t-shirt design you made. Some new clothing company decides to copy your image outright and print the design and sell it. Or even they might recreate it themselves, but it’s obvious the images are nearly identical. This is where some legal action might be a good idea, but in most cases, it’s not even worth your time to pursue it. A lawyer will tell you that you’ll spend more money on legal fees than anything you’d make from the poor startup clothing company. At best, you send a Cease and Desist letter in addition to an email or phone call explaining your feelings towards the matter.

If it’s a large scale company that rips your designs (which DOES happen!) you have a case. This happened when Johnny Cupcakes was commissioned to design some shirts for Urban Outfitters. They rejected his designs and then released shirts very similar to what he created. I’m not exactly sure what happened in the end, but you’ll be hard pressed to find a lawyer who doesn’t want to go after a “big fish.”

If this happens to you, you probably have a legal case and it could be worth your time to pursue it. 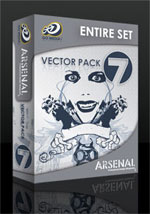 In the case of our vector packs, we are frequently notified by our own customers when they see someone on the net illegally sharing or distributing our products. This is a little different than someone ripping off our design. This is very similar to downloading software or movies. It’s a digital file that we are selling to customers. That income becomes revenue that we use to pay our employees and grow our company. When people are stealing and sharing and in some cases even selling, it directly hurts our sales. We DO see a dip in sales when stuff like this happens. But when you try to contact the website, and it’s in Russian or Hebrew, it’s tough to get a response out of it. You have to kind of assume people will be pirating your digital files if there is any sort of value to them.

What do you do?

Most cases, you can simply report abuse or contact the site owner and politely ask for them to remove the link. That usually works. If not, be persistent. I have a friend who runs a Type Foundry and their fonts are always being pirated. He has since started an anti-piracy coalition online and gathered a team of creatives to help him fight it. I’m not sure if it’s working, but it’s a good start!

If you’re good, you will get your designs ripped. That’s a fact. People want to be like you, but don’t have enough respect for you or themselves to ask permission. One of our designers here Oliver, keeps seeing his “circle series” being freely available as cell phone wallpaper, band’s album artwork, etc. Sometimes it’s flattering, but most of the time it’s insulting.

There isn’t a whole lot you can do unless the culprit is worth a damn. If the company is broke, a lawyer isn’t going to care enough about it to help you. However, most small time offenders can be back on your side with a simple email or phone call. This entire post doesn’t need to be this long, because from my experience that’s all that can be done.

1.) Watermark your images with your logo or name
2.) Add a copyright tag on every image you post on the web
3.) Disable Right Clicking on your Image
4.) Other alternatives